According to unpublished accounts of the parishes of Leicestershire by the late Canon D G Sweeney, the first regular Masses to be celebrated in Lutterworth since the reformation were said once a week by a Father Martin, chaplain to the Earl of Denbigh at Newnham Paddox, just over the Warwickshire border.

In 1879 Lord Braye succeeded to the title and to the family seat of nearby Stanford Hall. He immediately began the erection of a domestic chapel to replace an earlier one which had been used from 1869 to 1875. This earlier chapel had been dedicated to St Alphonsus – hence the twin dedication of this church today.

In 1880 Lord Braye brought Father (later Canon) Alfred Hazeland, whom he had known as a fellow student at Prior Park, to serve the market town and at the same time to be domestic chaplain at Stanford Hall. After his ordination, on 20th September 1873, Father Hazeland spent about six years teaching at Prior Park, followed by less than a year as curate at St Nicholas’, Bristol. From Bristol he came to Lutterworth to the parish which he founded and remained here as parish priest for an incredible sixty years! He died on St Patrick’s Day 1940 and was buried in the little cemetery in the ground alongside the church. 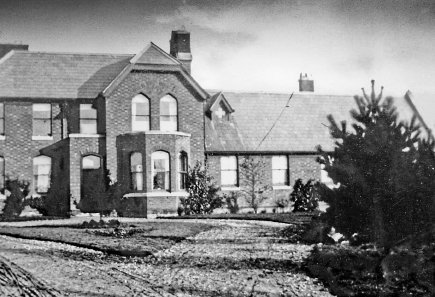 In 1881, the Earl of Denbigh presented the mission with a three and a quarter acre site on the Bitteswell Road – the present site. Plans were drawn up for a new church by Canon Hazeland himself. The church was opened on 11th August 1881 and both the presbytery and the church remained virtually unchanged for almost 100 years.

The total cost of the house and church amounted to £1,500, of which £200 came from the Earl of Denbigh and the remainder from Father Hazeland. He also supplied all of the furniture in the house, and much of that in the church and sacristy too. In fact by 1896 he claimed a life interest in the parish property “having sacrificed his own private fortune of £1,200 in building and improving and maintaining same”.

(Above)  The Church as it was originally built.  The narrow sanctuary had been designed so that it could be shut off from the body of the church with folding wooden doors. The church was then used during the week as a school – certainly from 1883 and possibly from 1881.

(Right)  The altar of Our Lady Of Victories & St. Alphonsus taken from a postcard sent from Switzerland by Lord Braye to Canon Hazeland, circa 1910 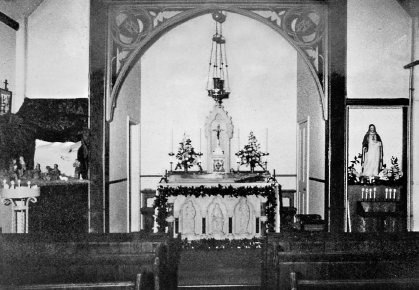