Sadly, although Cannon Hazeland’s stewardship is well and justifiably documented the contribution of the incumbents which followed him are sketchy to say the least.

According to Father Feeley, the parish priest since 1976 (?) Canon Hazeland was followed in 1940 by a Father Timothy Shanaghan. After him followed, but possibly not in this order, Father Tierney from the Sacred Heart parish in Leicester, who moved on to Swadlincote, and a Father Danny Ainsworth.

One of the better known parish priests was Father McDonagh who was often seen on long walks around the district. In later life Father McDonagh suffered from Parkinson’s disease and eventually had to be relieved of his duties. He was looked after in his later years by the Blue Nuns.

Father (I think Gerald) Jordan, a member of the Sacred Heart Fathers, replaced Father McDonagh at some time before 1969 and for many years during Father Jordan’s time here Sister Michael, from the convent in Harborough, came over each week in term time to give the children their religious instruction.

1980 was a watershed in the parish. It marked the centenary of the newly established Catholic parish of Lutterworth, the silver jubilee of the then relatively new parish priest Father John Feeley and more or less the beginning of a building programme which has continued to the present day. Until that point Canon Hazeland would have recognised virtually every brick and feature!

In 1978, largely due to an anonymous donation, the original cramped sanctuary was expanded by the demolition of the confessional to the left and the store room to the right. The ornate stone altar was brought forward to conform to the then new changes in the liturgy, and an additional sacristy was built to provide a robing room for the priest, and a new confessional. It was around this time that the original choir loft was removed. 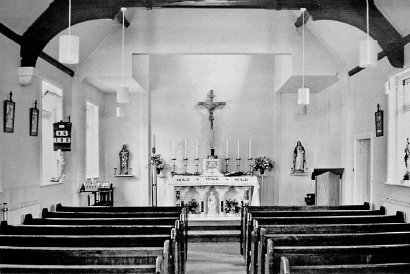 This view shows the interior of the Church after the internal walls on the altar were removed, making more space.

In 1980 building began to add an extension which was bigger than the church itself. This provided a narthex, meeting room, kitchen and toilet facilities. Many people were involved in fund raising. One idea was for people to buy a brick and sign their name on it. Their names are concealed in the walls around us.