In spring 2009 Father Feeley was asked by John Turner, retired tutor at Lutterworth Grammar School and ex Mayor of our town, if he and his wife Sue could restore the burial ground at the end of their garden. The burial ground had not been tended for many years and was very overgrown and in a bad state of repair, the last burial being in 1953. Father Feeley was very appreciative of their offer and the hard work began.

Ten graves and headstones have been discovered: the earliest dated 1891 and the most recent dated 1953, although our parish records show twelve more people were buried there. It is believed that Canon Hazeland, the first parish priest of the church, was buried in the cemetery in 1940, although a headstone has not been found.

On 12th November fifteen parishioners visited the cemetery, joined by Sue and John where prayers were said for all the Holy Souls. The names of all the people buried there were read out and remembered. It is hoped that this will become a regular parish event.

If anyone has any old photographs of the cemetery or has family connections to a person buried there, please contact June Jones or leave a note on the Church notice board. 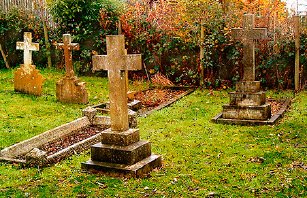 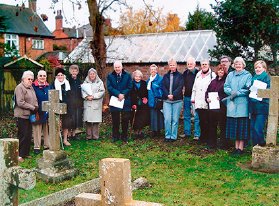